First off, the Around The World Food Tour winners.
The tour, always popular and selling out quickly, lets guests experience tastes and culture they may not have before by stopping at several shops and restaurants along International Avenue. The shop owners not only share their food but also stories of their country and culinary experiences with every tour and it’s no wonder the guests on our food tours have chosen these three stops as their top favorites!

First Place Winner: Roch and his family at Cedars Food Mart
Runner Up: Kartini and her family at Indonesian Kitchen

Next, the Tung Nguyen Community Service Award. Tung, an owner of Mekong Restaurant, passed away Feb 15, 2013. He was a smart, lovely soul….a well-known humanitarian and community minded person. Tung published the very successful Thoi Bao newspaper, organized Vietnamese galas bringing international stars to the city, and helped raise money for the Children’s Hospital and other worthy causes.
This year we would like to recognize Stantec who did an outstanding job overseeing the 17th Avenue SE transportation and urban design and City of Calgary Transportation Infrastructure Project Managers – Howard Kai and Colin Chapman for their work managing the project and the collaborative approach they took with us.

Last, and most definitely not least, the Ray Rehberg Clean Award. Many of you may remember Ray, he worked for the BRZ since 1996 as our litter and graffiti abatement employee. He put forth tireless effort into making the Avenue look nice, stopping to chat with shopkeepers along the way. Passing away earlier this year, we wanted to recognize his incredible dedication by creating this award that acknowledges those businesses who keep their property tidy and show their community pride.

We hope you take some time to stop by not only these businesses, but the many others along International Avenue BRZ. It is a treasure trove and truly Calgary’s Culinary and Cultural Capital! 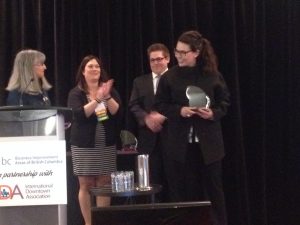 New Maverick, Calgary Herald, – Alison Karim-McSwiney was chosen as one of the 30 Alberta New Mavericks, 2010

City of Calgary Award / Community Advocacy – as part of the C-BIZ team, 2007

Alberta Centennial Medalist – Alison Karim-McSwiney- conferred in recognition of the contribution and service to the people, communities and province of Alberta 2005, constituency of Calgary East