The community is vast with seven communities making up the Greater Forest Lawn area, including Dover, Forest Lawn, Erin Woods, Albert Park/Radisson Heights, Forest Heights, Southview, and Penbrook Meadows. The total population of the community is over 50,000. 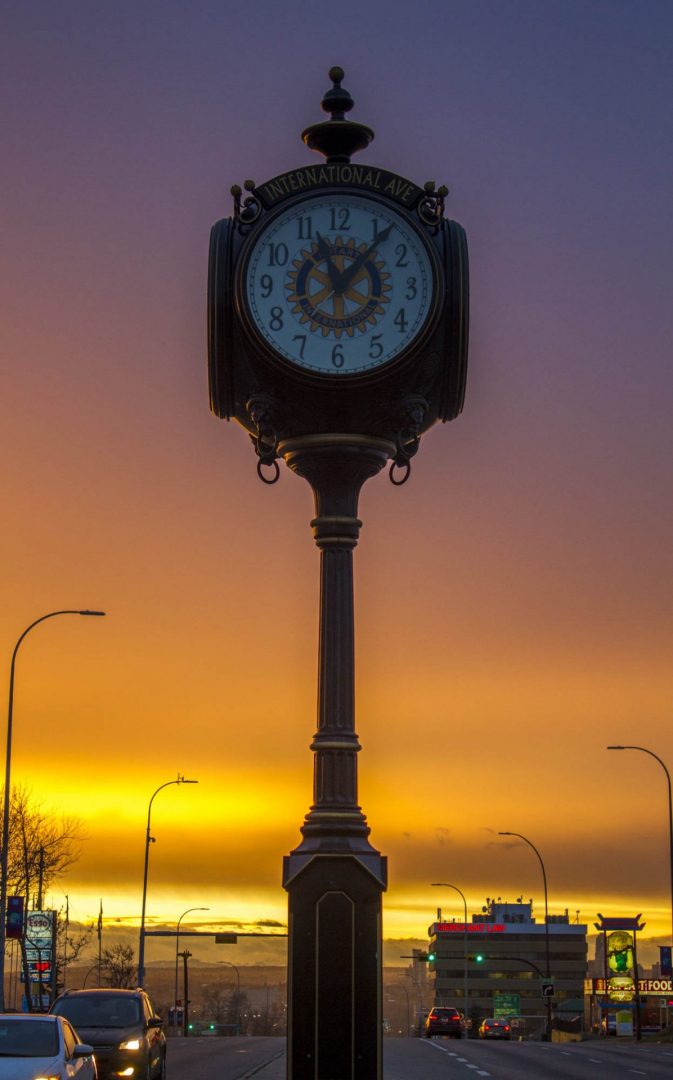 These strips of photos show what 17 Avenue SE looked like many years ago. These analog photos were stitched together using scissors, glue, and a lot of dedication. In 2021, with the help of volunteers, the photo strips were painstakingly digitized so that they can be virtually shared with the world.

Click the photo strips for a PDF - Allowing you to zoom in and see the details!

History of the Area

We welcome contributions to this section from community members - is there a piece of history or another perspective you want heard? Contact us! 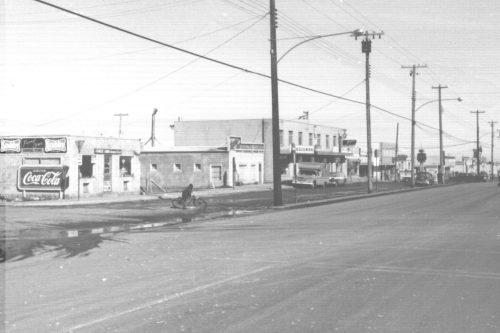 The rich multicultural history of International Avenue precedes settlement, it is important to recognize. In fact, Greater Forest Lawn is located on the traditional territories of the Métis Nation of Alberta (Region 3) and the peoples of Treaty 7, including the Blackfoot Confederacy (Siksika, Kainai, Piikani), Stoney Nakoda Nations, and Tsuut’ina Nation. Moreover, it is important to recognize that Indigenous culture is not just history, it is living and dynamic, and Indigenous people are an ongoing part of the intricate cultural mosaic of the area.

With the ceremonial driving of the last spike in the national railway, the nation-state of Canada was thus connected from coast to coast. However, vast tracts of arable land remained in the west. The Liberal government under Sir Wilfrid Laurier was determined to attract farmers to this area, to enhance Canada’s economic growth. He appointed Clifford Sifton who embarked on an ambitious campaign of encouraging immigration to the Canadian Prairies. With the promise of 160 acres of 'free land' to farmers, Sifton’s initiatives succeeded in attracting many immigrants to the Canadian West during this first great wave of immigration from 1870 – 1930.

So began a more intensive populating of the area east of the bustling city of Calgary, in the Municipality of Shepard. Immigrants from America and eastern and central Europe homesteaded here, bringing with them a legacy of hard work. Skilled trades people, entrepreneurs and others came too, recognizing the need for their services that would be created by this increasing population.

The unincorporated hamlets of Forest Lawn, Albert Park and Hubalta appeared within the Municipality of Shepard around 1910 as small communities sprang up to support the surrounding agricultural families. A school, the one-room Bow River School, had already been constructed in 1904 at what is now known as 17 Avenue and 41 Street SE. The first class consisted of six pupils. Due to rapid growth a new, four-room school was constructed at 16 Avenue and 39 Street in 1912. It was again named “Bow River” and continued to serve the community until it was demolished in 1955 to make way for the new Patrick Airlie Elementary School. The first Bow River School was moved to Albert Park where it served as that communities first school. That building is still standing and is currently used as a church.

Real estate speculators from the United States attempted to take advantage of the boom times by buying up  pieces of land and subdividing them into residential lots. When the lots did notsell due to lack of a rail link to Calgary, the speculators laid their own tracks from the Calgary City limits and promised the railroad would soon be coming. Of course that never happened.

With the coming of World War I the area was in a serious economic depression and many of the lots reverted back to the Municipality of Shepard.  Some twenty-five-foot lots which had previously sold for $300 were now sold for as low as $5.

In 1953 the Village of Forest Lawn received town status. Service organizations and sports teams abounded. Elk, Moose, Kinsmen and Lions Clubs were active in the community, as was Teen Town (a forerunner to the Boys and Girls Club). Residents participated on Town Council (the Mayor and the Councilors were not paid), the community association, school associations and church groups. Landowner David D Oughton donated land for the building of a much-needed school which was built in the Albert Park area in 1953. The burgeoning population of the Bow River School had been educated in several facilities including community halls, churches, and two unused WWII armories until a new elementary school was built. The new school was named for Patrick Airlie, who had served 37 years on the Bow River School Board and was instrumental in organizing the first library and community association in the area.

In 1953 the young town organized an annual sports day, which was soon changed to include a parade down 17 Avenue in which much of the community took part and showed their pride. The 1955 float “Forest Lawn – Town of the Future” was entered in the Calgary Stampede Parade and took first place.  The town also had its own police force and voluntary fire department. In the late ˜50s an intensive public works program was begun which saw construction of sidewalks, curbs, gutters, storm sewers and other amenities. The town also operated its own power company and bus service into Calgary.

In 1958 the Town applied for city status, but this was never acted on. With its growing ties to the City of Calgary and political will which favoured centralization of Alberta’s two main metropolitan areas, the Town of Forest Lawn, with a population of 12,000, was annexed by the City of Calgary on December 30, 1961. The last mayor of Forest Lawn, Harry Akkerman, handed over the key to the town to Calgary Mayor Harry Hays, asking for a “square deal” for Forest Lawn.

Since then the communities of Forest Lawn and Albert Park have continued to welcome waves of immigrants reflecting changing conditions in countries around the world, including, Chinese, Pakistani, Vietnamese, Filipino, Hispanic and Sudanese. Many newer communities have also been established in the area once part of the Town of Forest Lawn.

– BRZ partners with United Way and IAACC and creates the “Great in Greater Forest Lawn”  designed to increase the community’s social capacity
– City allows BRZ to have large trees adopted and relocated to other parts of the City, over 150 large trees find new homes and area saved from the wood pile
– Awards received for Programming and Partnerships and another for Communications
– BRZ and Transportation Infrastructure form Urban Design Committee to oversee plans and strategies for construction and develop top notch urban design elements for street. Team meets bi-weekly and includes: Dr. Iain Chenowyth of FL Vet, Ron Jossul of Rona, Andrew Marriott of Tim Horton's, Mike Shymka,  Alison Karim-McSwiney-BRZ, Cst. Ray Hostland-CPS, Sgt. Nick Wilsher-CPS, Howard Kai-City, David Thatcher- Stantec, Chris Jennings-Stantec and Colin Chapman- City.
– A series of open houses are held for feedback
– ArtBOX continues to be managed by BRZ and has over 250 community artists as members until November 2016

– Second and final year of project (worth over $176 million) in upgrades
– EMERGE Co-Work Hub, Retail Incubator, Market and Kitchen Incubator continue to provide a launching pad for new businesses
– City of Calgary completes and approves the International Avenue Area Redevelopment Plan: The City's official plan to guide future growth and development along the Avenue
– Working on antipoverty initiative including a possible CDC
– Completion of the Max Purple BRT Line
– The first annual East Town Get Down music festival is a roaring success: Eight businesses became venues, hosting a total of 75 bands, and attracting hundreds of Calgarians
– 'Peace' by the late, loved Elsie Stein is the 11th mural added to the Avenue

– Unity Park was completed. To help bring the park to life, our 'Plant the Park' event brought together a couple dozen helping hands to add flowers, shrubs, and tall grasses. Thanks volunteers!
– A free workshop was hosted for business owners to develop their web / social media skills
– The first annual Tour de Purple free guided bike-ride took place. Participants learnt about the local transportation history of the area, shared discussion, and biked along the route of the MAX Purple BRT line in support of active transportation
– A Greater Forest Lawn social disorder taskforce was created
– The 2nd annual East Town Get Down turned up the dial: featuring more music, venues, and awesome food
– The Best of the East Stampede Breakfest and Global Fest are joined by the emergeMARKET, letting local vendors join in and add to the excitement of these events
– The Journey to Freedom Park student design contest is held by the Calgary Vietnamese-Canadian Association, inspiring the design for a new park at the western gateway to the Avenue

– The COVID-19 pandemic was faced with resilience from our local businesses and community members, finding new ways to connect, even if many regular events were put off
– Three new unique pieces of art were installed on the Avenue: The Golden Pear Tree, Kawa'pomahkaiks, and Personifying the Neighbourhood
– The 2nd annual Tour de Purple rides-on
– Park(ing) Day comes to International Avenue, featuring a board of positive messages from community members and business owners
– Community engagement for the Journey to Freedom Park was conducted between the BRZ and the Calgary Vietnamese-Canadian Association. To ensure accessibility, English and Vietnamese versions were distributed by paper and digital copies.
– The City of Calgary announces the East Calgary improvements, including a cycle track on 19 Ave and other improvements on 28 St
– Forest Lawn Husky privately commissions three murals for their building featuring the mountainous wilderness

– The BRZ receives funding from the Canada Healthy Communities Initiative for several projects
– To promote safe and enjoyable dinning, the BRZ launches Project Patio to bring patio furniture and permits to many local restaurants
– The East Calgary Ambassador program is developed by the BRZ and 12CSI. The ambassadors are a friendly on-street team to help in a variety of ways for community safety and vibrancy
– The 'Road Less Travelled' project was initiated for 32nd Street, where the addition of murals, LED lanterns, and sculptures are used to make it a more welcoming, interesting place. This included extensive community engagement and consultation
– The emergeMARKET comes to Unity Park, making the Unity Market. Four markets featured music, giant games, local vendors, and businesses to support social and economic development
– Construction was completed on the 28 St upgrades and a signalled intersection at 19 Ave and 36 St
– Two new unique art installations were completed: Dance and Reflecting Growth
– Global Fest makes a return, and it was spectacular
– Two cultural events are hosted in Unity Park: one by Arts Commons, and one by the City of Calgary
– The Tour de Purple 3 keeps the good times rollin'
– The YYC Bubble Tea Festival is created with the Chinatown and Crescent Heights Village BIAs, pitting 16 restaurants against each other in friendly competition. At Unity Park, celebrity judges crowned Noodle World the winner!

- Ambassador project continues and is recognized with a Alberta Justice Award

-Project Patio is back

-BRZ reaches agreement with Victory Outreach on the former T and C site to ensure that the site will be used for affordable housing and not as a transitional shelter.  Forms Oversight Committee with key community stakeholders at the table.

-East Town Get Down is back and is the best yet.  East Town Chow Down is introduced to incorporate $5 food plates at all venues.  Work on 2023 addition is underway!

- Journey to Freedom Park is officially opened on July 1st.

-Around the World Food Tours start up again

-Our Executive Director, Alison Karim-McSwiney, is recognized with a Queen's Platinum Jubilee Medal.